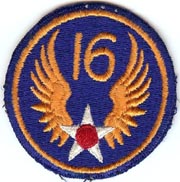 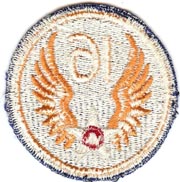 Late 1940's 16th Air Force Shoulder Patch. Just under three inches tall. Fully machine embroidered. Used. This has been referred to as a Ghost / Phantom unit patch. What it was made for was the John Wayne movie "Jet Pilot" which was released in the late 1940's. It is a rare vintage patch and a rare movie prop item. We have had by far more real 18th air forces then I have had these.