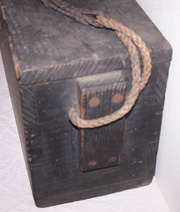 Incredible Meiji Restoration Period Enfield Ammunition Box. Great dove tailed construction. The box is about nine inches tall, six and a half inches wide and sixteen and a half inches long. Has a hinged lid with a braided rope carrying strap. Painted on the front and back are two lines of Japanese characters and 500. Roughly translated it is English Enfield Rifle Ammunition. If only this would have been for some of the Winchester's the US sent over.Inside is divided into four sections with lead dividers. On the rim and lid are some more Japanese characters written in ink. When we bought these in Japan we were told that they came out of a Doctor's estate that was on the Gov. side and picked these up when they were empty of ammo and used them to carry medical supplies in them. There are some type of remnants of medicine in the bottom. These have been used and there are some field repairs, esp. on the lid. It is amazing to think that this has survived from rougly the mid to late 1870's. Plus the condition is actually really good. If these were US ammo boxes from the Indian Campaigns, you can almost name your price. Would make a great display piece for that "LAST SAMURAI" era display.